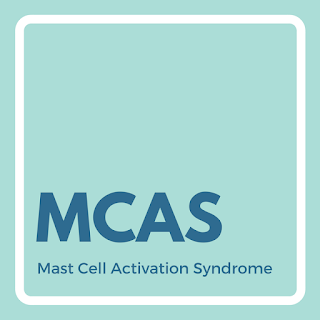 Just a couple months ago, I passed the 3-year mark of This Crazy Illness, the anniversary of the first trip to the hospital, the first time I knew for sure that something was wrong.

But looking back, things had been off track for quite awhile. In fact, there is a litany of random symptoms that have been lurking for decades; things I was either willfully ignoring, because my dad raised a tough daughter #justsayin , or things I honestly didn't realize were all that weird.

Ummm... most people's shoulders don't pop halfway out of joint when they pick up something heavier than a book? Who knew?

And most beachcombers don't break out with weird skin reactions from dipping their toes in the ocean? Well, yeah, growing up in Florida, I did actually know that, but it didn't seem like something to worry about... just another thing on a long list of things to either endure or avoid.


Working with a fantastic Patient Advocacy group (which deserves its own blog post), we've come up with a really good theory about all of this. A Grand Unifying Theory that explains almost everything about This Crazy Illness, along with a ton of stuff going all the way back to childhood.

MCAS/MCAD is basically a really crazy type of allergy. Mast Cells are involved in fighting off foreign invaders, and perhaps their greatest claim to fame is that they release Histamine (yick), which of course is the bane of allergy sufferers everywhere.

But the thing is, they can actually release a ton of other biochemicals. Like up to 200 different ones that we know of. And these biochemicals can trigger all sorts of responses in all sorts of organ systems.

We've sort-of known about this for awhile because of a type of cancer called Mastocytosis, where your body is creating too many Mast Cells. But in just the past 10 years we've started to find that even if you can have the appropriate number of Mast Cells, they can become super over-reactive; responding to things they should just ignore, and releasing all sorts of chemical "mediators" that they shouldn't be releasing.

I want to stress that this is not something I've been diagnosed with yet. But I have already been tested for it, and I have a big trip on the horizon to a specialist in Atlanta to discuss test results and diagnosis/treatment options.

It's the best lead we've had in a long time, and it's hard not to get too excited about a potential answer for what's been going on.

But whether or not this turns out to be the culprit, I wanted to put together some resources that might be able to help others in finding a diagnosis, or in learning more about what a friend or family member might be going through.

It's new enough that finding easy-to-read sources that are also easily vetted for accuracy is sort-of tough. Many of the healthcare mainstays just have a paragraph or two under the Mastocytosis heading.

Also, it doesn't really have a good niche it lives in, in the medical world. Doctors who specialize in MCAS tend to be Hematologists or Allergists, but your average allergist probably won't have seen it before.

One last note: things to watch as the research progresses -- there seems to be some sort of link between MCAS and Hypermobility issues (specifically a certain type of Ehlers-Danlos Syndrome) and also MCAS and Autism.

It's too early to say for sure, but doctors and patient-communities have both noticed what seem to be weirdly coincidentally high correlations. And there's also a working theory that a subset of Chronic Fatigue Syndrome patients might actually be MCAS patients 'in hiding'.


Never Bet Against Occam by Dr Afrin - A book written by one of the leading experts, detailing how he came to recognize the underlying physiology that was happening in his patients, and filled with case studies and examples of the many ways MCAS can 'present' and can impact patients' lives.

Me And My Mast Cells - "A compendium of information about Mastocytosis' -- extensive resources collected by a Mast Cell patient-advocate.

Mast Cell Activation Syndrome: A Review - (behind a paywall... and I'm showing great restraint by declining to get up on my 'patient access and inclusion' soapbox...) published 2013 in Current Allergy And Asthma Reports

Characterization of Mast Cell Activation Syndrome - (again, behind a paywall.... ahem.) Dr Afrin is one of the authors, and it was published very recently (March 2017, I think). I was actually able to get my hands on a copy, if any real-life friends would like to borrow it.

Mast cell activation disease: An underappreciated cause of neurologic and psychiatric symptoms and diseases - (again... paywall) Dr Afrin is a co-author, and I happen to have a copy of it, as well. This one was probably the most interesting to me besides the book, because my first and most severe symptoms were neurological, including burning nerve pain, problems with vision and balance, numbness and loss of motor control after a symptom flare, and migraines.

Mast Cell Activation Syndrome: When Histamine Goes Haywire - okay, here's the thing. I have absolutely not vetted any part of this website except for the page on MCAS. No idea the agenda/accuracy of anything else, but the page on MCAS is a good, quick, easy, accurate read.


There are some great resources out there, but most seem to live on patient blogs (never underestimate the power of an intelligent, engaged, intrepid patient!), or in research articles....

If you know of any good resources for patients and caregivers or their doctors, please share in the comments, or shoot me an email!

Nota Bene: due to my fear and loathing of all things Life Sciences (pro-tip: fourth grade science labs where the nine-year-olds dissect bunny rabbits might, ya know.. sometimes backfire on your valiant efforts to get kids interested in biology. I'm just saying.)  please take my summaries with a grain of salt. Refer to the experts in all things bio-chemical!