Strategery: The Breaking Point (Part 3) - How It Works 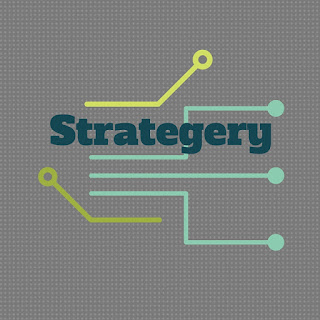 Which just leaves... the How.

So here's the deal. This is the process that I've been using for tracking activity and figuring out what my limits are.

Basically, it's just a budget. It's exactly like making a budget for how much money I'd spend in a week, except money is Time, and there are two accounts to draw from: Mental Energy and Physical Energy.

The catch is (and it's a big one), unlike money and income, it's very hard to know exactly how much time there is to work with. How on earth do I know if my energy account has 10 hours a week or 40?

The short answer is: by guessing. I start by guessing how much energy I will have to spend on different activities, and sometimes I will be completely, utterly wrong. But because I've tracked it all week, I'll have a better guess the next... and so, after a month or so I'm finally able to see a pattern emerge, and now have a pretty solid framework to work with.

When I first started this I had no idea how reliable it would be, but it turns out that barring random, terrible, symptom flares, it's actually incredibly consistent.

But it took time and patience and a willingness to be wrong and experiment a little to get there.

First Caveat: the system works for me because I like math. Numbers and spreadsheets are my happy place. So if spreadsheets make you queasy, you are very possibly going to read this and think 'holy moly, who on earth would voluntarily subject themselves to this'. It's okay, I get it. It works for me but I might be the only person it works for.

Second caveat: it's less a 'system' and more a 'process', and this is probably the zenith of its complexity. It didn't start out this involved, and I anticipate that as some parts of it become more stable, they will become less necessary to track (and perhaps, it may become routine enough that I can go back to 'feeling' my way through days)

Also... I tend to approach the whole thing as a science experiment... Set a Hypothesis. Track data through the week. Review data, crunch numbers, and see where things started to fall apart. Some folks might be tempted to get caught up in the rule-following parts, but I usually run right through my self-imposed limits, and use the system to backtrack the week and say 'yep, I get it -- Tuesday is definitely where things went off course'.


So here it is, for what it's worth --
The Very Long Probably Confusing How-To Explanation in which I explain my system for 'Pacing'
-- which I swear is not as complicated as I am going to make it sound.

I go through all the normal everyday activities that happened over the last week, or are likely to happen over the next week. And then add to it the goals I'd like to accomplish and/or would like to set aside time and energy for.

It's really just brainstorming, and doesn't have to be perfect -- just a starting point.

Step back and see if anything seems like it belongs together. Or could be broken down into smaller goals or tasks. It's really more of an art, and the first (or second) attempt is probably not going to be perfect, but it's okay because 'living it out' will reveal the kinks to adjust for next time.


Examples:
Originally I had a category:
-Errands/Anything else out of the house

But found that when planning the week it worked better to use:
- Church/Bible study
- Choir/Handbells
- Errands
- Anything else out of the house
And eventually decided that "Doctor Appointment" needed it's own category...

There's a good case for 3 categories of activities: easy, medium, hard... but I'm not good at judging effort that way, so I only use two:

Activities that are basically physically active


Examples:
Phys Therapy exercises or yoga
Cooking
Housework
Church
Choir
Dr appointment
Errands/**anything out of the house**
*even if the 'activity' is reading a book -- if I am at a coffee shop or a park and not at home, it is "Active"

I don't include the most basic stuff like eating or taking a shower, but do include time spent getting ready if it involves anything more than throwing on jeans, T-shirt, and a baseball cap.... (so hair/makeup/finding an outfit all counts...)

Activities that are basically physically inactive, but require mental energy

In other words: anything I can do sitting on the couch but requiring more energy than watching TV.

I recently added new category: "Dealing with random health stuff", which used to be under "Life"... Things like finding medicine that's been on back-order, or scheduling appointments, or organizing records... because I'm curious exactly how much it eats into my activity-allowance. (My guess is "a lot".)

I use Excel, but whatevs.

Left-hand column lists all the activity groups, in two sections for Mentally Active and Physically Active (or whatever your categories are).

With a couple blank lines in case something new comes up mid-week.

Columns for each day of the week. 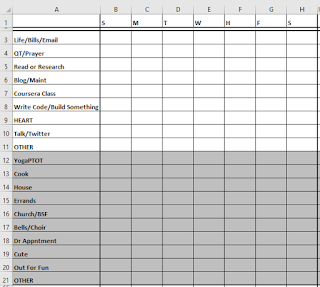 Actual is just a placeholder to add things up at the end of the week. 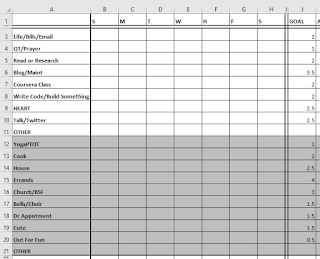 6. Add It Up and Average It Out

Add up the GOAL column, and average it out over 7 days.

Now comes the hard part, especially at the beginning... Does the daily average seem pretty reasonable?

I also take the extra step of adding up and averaging out the two sections: Mentally vs Physically active, and evaluate those as well -- Are they lopsided? Do each of these seem reasonable?

This is really just a gut-check at first, but later becomes much easier. If it seems like anything is going to be too much, I'll see if there are things I can cut back on, or if there's (miraculously) extra room for something fun or a goal I've been wanting to work on, I'll decide what to add. 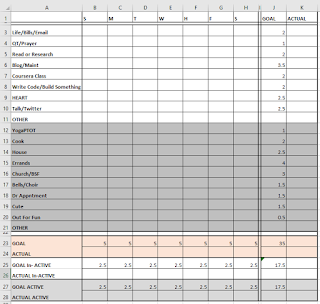 And that's it, that's how I set up the framework for the week. Obviously, as time goes on, there's less setup and more copy-paste-print involved.

B. LIVING IT OUT

In addition to numbers and spreadsheets, I really love making lists. Also, getting gold stars for getting things done. So this may be many more unnecessary steps for most folks, but for me gives a better sense of control over my time and energy. 'YMMV'.

1. Beginning of the week: I print out the chart, and put it on the clipboard.

Why the clipboard, you ask?

Because that way I'll be able to find it. Seriously.


2. Each morning, using the chart, take a look at everything I need or want to happen that day. Yep, it's just a to-do list, but in context of the big picture for the week, and with everything living under one of Activity categories. And keeping in mind the average activity level that I would want to hit over the next few days....

The Daily List goes on the index card, and that way if I'm out for errands, it's the only thing I need to take with me. (Grocery list, appointments, etc)

So it also becomes the activity tracker. Instead of just crossing off a task, I put the amount of time I spent on it. Which might seem like over-kill but with my swiss-cheese memory, it's a helpful cheat sheet of everything that happened during the day.

And also, if things start to go off-course, I'll be able to start 'cutting' activities that are going to put me over the limit, so I don't wind up out at a store at the point where I'll hit a wall.


3. At the end of the day, I enter all the activity into the spreadsheet.

I use a highlighter to color in a box if I accomplished any amount of activity for that category, and write in the total time. Which might be overkill, but it makes all the little stuff that I did that day feel like an accomplishment. And it makes it easier to read.


4. Add up Mentally Active/Physically Active/All Activity and put the totals at the bottom.

And then... because I do really like numbers, I sometimes do some math. I'll run the average of the week so far sometimes I just write the over/under, to see if I'm on track or already on my way to hitting a wall. 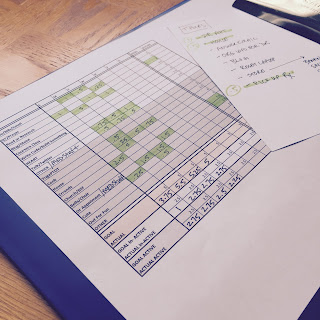 Too many steps? Yes, probably. I won't do all of this forever, but it's been a good exercise to try 'for awhile'.


C. REVIEW
(aka: Yes, another spreadsheet)

1. Yep, another chart. This one just holds the totals from each week.


2. Along with a very unscientific judgment call like "Pretty good amount", "Recovery", "Almost too much", "WAY TOO MUCH".


3. But after a few weeks, all of this tracking and math started to pay off, and I was able to narrow in on what seems to be my general limit on activity. It's not set in stone, and the specific types of activities and amount and degree of difficulty I am sure plays a part in that, but in a very general sense, it seems like there is a ballpark number of hours of activity that I need to live within, or risk hitting a wall and having to sacrifice a week or two to recovery.

First of all, I need to admit that I've lied about something. I actually don't track activity in hours, because an hour of activity is usually too much to do at one time. My real-life charts use a completely different system where I use "units of time" in which "one" is 15 minutes. In real-life this works well because I can use a 15 minute timer, and my brain is just wired to think about time this way. But adding that to the steps was going to make things even more confusing.

Secondly, this is the point where I reveal that I am actually very much NOT a Type A personality... Because I am very loose and wishy-washy when it comes to goal-setting. If it turns out mid-week that I decided to start a new coursera class, and don't even crack open a book, I will wind up with two activity goals that are way off the mark. And that's okay.

The system works for me because of what it reveals, not because of what it locks me into. But it does reveal exactly where my time went, so if I didn't meet the Coursera goal because I was doing something that was truly a waste of time, it would be an encouragement to do better the next week.

It has also revealed the cost of unexpected events. Like having trouble finding the medicine that's on backorder, or getting the a/c fixed, or when I broke a glass and used most of the energy for the day on cleaning it up.

I approach it with a philosophy of "make a guess, see how things unfold, look at how things went".

The big key is that it doesn't have to be perfect, because this week, just like the last, and just like the next, will be a work in progress. But over time, the overall summary will (hopefully) reveal some trends and help narrow in on Sustainable Momentum.


What are your strategies for pacing? Have you found a system that works for you? Are there signs or symptoms that you look for to know when to start cutting back, or do you need a more structured plan?