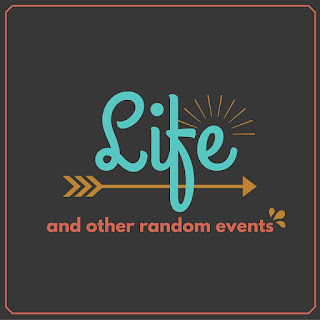 Good grief it's been a slow, sputtering start to the new year. Missed blog posts, missed Twitter posts.. This afternoon I found (clean, empty) Tupperware containers in the fridge instead of cupboard, and while I'll spare you the details, it's clear I still have one foot firmly in 2015, and we're halfway through January.

On top of it all is the brutal shock of Winter. It's difficult to split time between two states but especially in January when one of those states doesn't do seasons. By this point I really should be able to figure out what to wear, at least by comparing to the day before, but jumping into it blind is so confusing.. is 40 degrees 2 coats or 3? I think I'll go with snowboarding socks tomorrow just to be safe.

In other news, after a post-travel sick-day, I'm now in that point of binge-watching British TV that I'm hearing everything I read with an English accent. And I'm afraid it's going to take a show with a whole lot of "yal"s to snap me back into American. (Justified's kindof intense.. maybe some basketball catchup and a couple episodes of Hart of Dixie...) 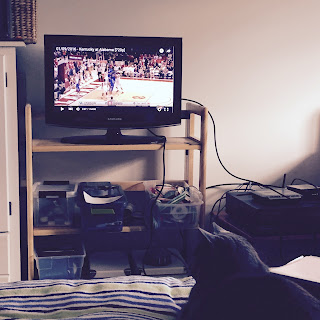 Note the new TV and magic TV-watching box from Santa, who is remarkably tech-savvy in our family, and has been long dismayed at the number of fully functional televisions in my house (zero). [But please ignore the wires, and the lint brush inexplicably hanging out in the middle of the craft supplies, and assume 'picking up the extra room' is on my urgent todo list (see below).]


But despite my geographic and temporal issues, I am in fact back in North Carolina and trying to sort out life in the new year. Now that I'm here, and looking at real life straight in the face, there's a new list a mile long full of stuff like "organize the extra room", "go through the closet under the stairs", "plan for doctor appointments", "decide if the medicine is working", "figure out what I'm blogging about", "log in to Twitter".....

The problem is sifting through what I want to do, what I need to do, and what I'm able to do. Some of it belongs on the Goal-list, some on the Well-list, and some on the 'get your butt in gear and take care of it today' list.

Today was one of those days when what I wanted to do was attempt some ambitious project like pulling everything out of the upstairs closet (which would have surely ended in disaster...) but what I needed was to accomplish some small task, well and good -- a bag unpacked or a drawer straightened...

I'm realizing how much I need a regular schedule and routine not just to keep things moving or make deadlines but to help me know what is possible and what I can plan for. To know how much I can take on, how to prioritize, and keep me from getting in over my head.

But enough rambling. It's time to check off "blog post for Wednesday" and there's a cat to feed, and errands to run, and basketball to watch...