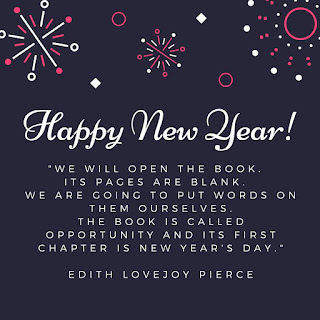 "We will open the book.  Its pages are blank.  We are going to put words on them ourselves. The book is called Opportunity and its first chapter is New Year's Day." ~Edith Lovejoy Pierce

Dad sent me this quote yesterday, and I just love it. It reminds me of my favorite Calvin and Hobbes.

Second, some upcoming blog changes -- to free up some energy for some non-blogging stuff, I'm going to try tweaking the posting schedule for a bit:

Sunday -- Grace (Faith-related stuff, like Bible verses and hymns.. an occasional post, not an every-week thing)
Monday -- Music (of course)
Wednesday -- Wildcard, but will now also hold the Misadventures in Medicine and Real Life posts
Friday -- Wildcat Basketball (and other Sports)

Third, I'll be unveiling my Well-List next Wednesday, but wanted to share my 2016 goals first.

There are a lot of things I would wish for the new year, and some of those will make the Well-List next week (a list of stuff to celebrate stages of getting closer to Well).

But the goals for today are the ones I am pretty sure are attainable, even if I stay in the same situation health-wise.

I plan to check in each quarter to see which ones I can cross off, which need some work, and which might need to be amended or added to.

- Use Illustrator to design a new shirt for a Teespring campaign

- Finish the book that will not end

- Learn how to use/program Rasberry Pi or Onion


Wow, that's a lot! If I'm able to do even half of those things, I think it will have been a good year.

That said, there are probably some things that look like they're missing. Some of them, like visiting out of state relatives, require the type of travel I haven't been able to do for awhile, and will appear on the Well-list.

Other stuff (like reading Data Science or posting blog updates) appears on my daily or weekly goal-list. (I really like making lists, can you tell? My life-story should be titled So Many Lists), which change pretty frequently these days because my health and energy have been so unpredictable.

I'm looking forward to tracking these and seeing what the new year brings!

Best wishes for a happy and safe New Year