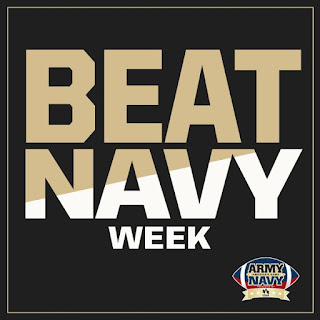 Rise and Shine campers, just when you thought football season was over, it's Army-Navy Gameday, yal! America's Game, but aside from patriotism, my brother is a West Point Grad, who played a little football during his time there so #BeatNavy day is an extra special day for us! #bragging #proudSister

The same folks who brought you the 'crooked K' on New Commonwealth Field also decided to rename America's oldest military institution. What the what is "Army West Point", exactly? We know what Army, USMA, and West Point are... but "Army West Point"s a new one and is annoying Old Grads everywhere. Also, everyone hates the new logo.

Navy had their helmets Hand Painted with ships on them. which is just stupid. Is this a football game, or is it a fashion show. It's a football game. And they don't even match! You're in the military! Uniforms by definition should be uniform! and they went and wrote stuff about 'torpedo's in all sorts of weird places... like on the palms of their gloves.

Okay, so Army decided to put branches on theirs, but instead of looking like they're ready for art class, they look like they are ready for battle. Let's just take a second and remember that football is a land war. Show up as pretty as you want to Navy, Army's going to walk on the field ready to play a ballgame, and looking like it.

Battle assessment from a USNA grad

Army player to watch: Kelvin White. He can play every position. Literally.

"I want an officer for a secret and dangerous mission. I want a West Point Football player!"

Back to your regularly scheduled Kentucky update:

The game earlier this week was pretty good, and the guys seem back on track.

In crazy news, we're getting a new wildcat, who could start as early as next Saturday. Or maybe redshirt. Or... ? I gotta say I'm a little confused by all of this -- how is it allowed? what does it do to the team dynamics? If it wasn't Army-Navy week I'd probably overthink it. As it is, I'll just invoke the Keep Calm and Trust Cal philosophy.

Game today, same time as Army-Navy. I might have to venture out to a local watering hole to try to catch both. (Although I absolutely hate watching games without sound, so... dilemma.)

Navy has won 13 years in a row. It's been terrible. Last year was Army's real shot.. this year, Navy has a potential Heisman candidate... but on Army-Navy gameday, all bets are off. #ItsTime #GoArmy #BeatNavy


More Wildcat Sports
Posted by abridged at 8:00 AM