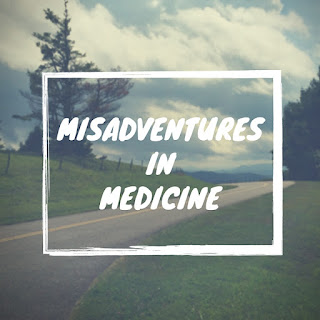 One of the biggest surprises in my journey through illness has been the nature of the Medical System. I have friends who are doctors, nurses, physical therapists.. and yet I had no idea that it was its own subculture, with its own rules and workflow. And there is a big learning gap for folks as clueless as I was. (My PCP? Oh. You mean, my doctor. Gotcha.)

It turns out that showing up to the doctor's office and saying "I'm sick" doesn't always magically lead to perfect diagnosis-finding appointments. Actually, it turns out that calling the doctor's office to and saying "I'm sick" doesn't always lead to an appointment. I don't like being pushy, and I don't like making waves -- so it took a while to understand that part of the system is that you can prove to the gatekeepers that you are sick enough to need an appointment if you call back 3 or 4 times and request the waiting list. (There's a waiting list? I had no idea. Because no-one told me.)

But that's a blog post for another day.. The point is, that all of this gate-keeping was new to me. And on top of that, I had no idea how to walk into an appointment and explain all of my crazy symptoms that had just appeared out of no-where. Especially because, being sick, I was not thinking or communicating that well to begin with.

I still have a lot to learn, and am incredibly thankful for the patient communities that I'm finding through social media and other online resources. While the medical system isn't perfect, it is incredibly encouraging to see how many individuals, organizations, and entrepreneurs are out there working to bridge the gaps!

I was immediately interested when I heard about Intake.Me's new ePatient 101 course. Their patient chats on twitter have been an excellent source of info sharing, and they seem very tuned-in to the challenges that both patients and doctors face.

The ePatient course is still in the preview stage, and the next installment will be released December 16th. But if the preview is any indication, it will be a fantastic resource for patients and care-givers as well.


First of all, because I didn't know what the 'e' stood for before I joined Twitter -- an ePatient is Empowered, Engaged, and Educated. In practice this means organizing medical records, researching conditions, and asking informed questions.

I especially liked this summary from one of the linked resources (How To Be An Empowered Patient):


The ability to be an empowered patient, though, requires a few things. First, to be empowered, a patient has to have sufficient knowledge.

Second, to be empowered, a patient has to be able to critically self-reflect. You cannot advocate for yourself unless you understand what you need and want out of a medical interaction.

Third, to be empowered, a patient must have certain skills.
ASK Questions
BRING Information
CHECK Understanding


Each lesson includes a variety of elements -- short instructional video, quiz, and supporting resources like infographics or articles.

But the best part is the Assignment. A guided action-item that helps you organize your medical history and plan for better appointments.

Other highlights include: how to read scientific papers, leveraging resources like Medivisor, and obtaining and organizing medical records.

The First: Suggestions for working towards a diagnosis (and what to do in the meantime). Medicine is a system of boxes, and when you don't fit a box with a pre-defined treatment plan, there's a lot of murky-ness to wade through.

The Second: more info on how to structure an appointment. It took me a long time to figure out that I was allowed to 'own' the agenda, and I still feel like I have a lot to learn. (eg: How to organize/explain symptoms, starting the appointment by recapping the action-items from the last visit, what to do if I feel like there's not a good plan in place for next steps...)

The ePatient101 course is still in the preview stage, with new content to be released, but it is off to a great start, and teaching people how to be better patients should have a big payoff for doctors as well. Look for great things from intake.me. The course is, I hope, the first of several, and they are also creating software for tracking medical records on both the patient and provider side, which I want to look into asap. (My 'hacked' system using Google Forms worked well for tracking symptoms but not so much for summarizing them...)

They should definitely make any Entrepreneurial Medicine's One To Watch list.


Note: I am not affiliated with intake.me or ePatient101. Just a fan.

The short version of my crazy illness stuff

*Misadventures in Medicine: my crazy journey through the medical system, the stuff that's helped, resources, and lessons learned.