Wildcat Sports: The Great Basketball Kickoff. and then there was football.

It's a big triple-game weekend for the cats, but I've got to admit, I didn't watch the Albany game very well, with half an eye on the events in Paris; just stunned and dumbfounded that a coordinated attack of that magnitude could have been carried out and so many lives lost in one night.

Experts are comparing it to the Mumbai attack in 2008 because of the coordination and complexity. My question is whether the August train attack could be somehow related (testing responses, etc) but the folks who would know aren't suggesting a connection, so maybe it's clear that August was an isolated event.

Solid reports I'm following: Threat Matrix and Bill Roggio will be on All Things Considered at 9:30am today

"We are going to fight and it will be ruthless..." - French President Hollande

Paris is a beautiful and resilient city; praying for their safety, strength, and healing in the days to come. 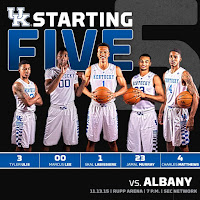 Great win against Albany, and even if it was messy, the kids are a joy to watch. The fouls (T's!), and turnovers make me nervous, hoping to see a cleaner game against NJIT, and that we can shake off a few more cobwebs before Duke on Tuesday.

And so much to love about the season ahead 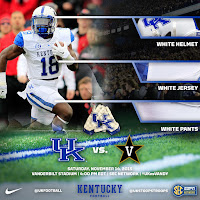 In football news, I've officially flipped the switch to basketball, and that's probably a good thing.

Not that I'm entirely abandoning last week's wishlist and of course, the chance to go bowling still looms over every game. But I think I'm in a better place emotionally, where a win will be a pleasant surprise, and a loss will be 'meh, it's UK Football'.

This week's drama: the haircut heard 'round the (blue) nation - A few years ago, around this part of the world, an interview went viral featuring a NC gentleman who had perhaps sampled a bit too much of his own 'shine, reporting a Sasquatch sighting. And now anytime someone talks about a guy's hair, this is what I think of. Sorry PattyIce, it's not personal, it's just that it cracks me up.

So to recap: I'm hopeful we'll do well against Vandy, anxious about securing a bowl spot, and interested to see how the QB situation shakes out.... and bring on the basketball.

A great weekend to be a UKWildcat fan. #LetsGo #Allin #Stillin #BBN