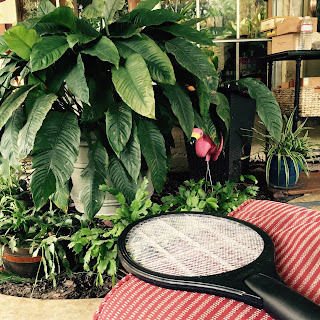 New this last trip to Florida: the Mosquitoes, which used to leave me well enough alone, were in Relentless Kamikaze Attack mode. Luckily, Dad had a new weapon: the Electric Bug Zapper Racket. Best Invention Ever. I suggested putting up a chalkboard to keep score, but was inexplicably vetoed.

Mildly informative video, which doesn't explain why they suddenly think I am like the free ice cream at Jason's Deli:

I assumed my battle with flying insects would be done when I returned to NC, but alas. Apparently when I closed up the house I remembered to empty out the fridge, but forgot to take the trash to the dumpster....

In other news, due to fruit flies, all meals will be served al fresco for foreseeable future.

Also: will henceforth ask trusted friend to do final walkthrough before locking up.

I finally settled on a 3-pronged attack, involving Terro traps, a couple DIY experiments, and targeted strikes with Windex.

After 24 hours of hard battle, have found:


- Windex works better than Febreeze and Charlie's cleaner -- even if you miss, it kindof slows them down so you can smack them later


- The Terro traps were a good start because I was too tired to figure out anything else, but it turns out the Terro trap is, in fact: a heavily-engineered plastic container, containing apple cider vinegar.

- In the end, my Macgyver'd solution - a very simple plastic container, containing apple cider vinegar - caught the most. (Though the Windex-smacking combo was the most satisfying.)

In summary: Yick. Gross. No thanks.