To know me is to know my love of all things that fly through the air.

All things except bats.. most insects... frisbees... actually I'm not a big fan of birds, either.

To know me is to know my love of all man-made mechanical things that carry humans through the air.

Biggest disappointment at KSC? There was some kind of space vehicle mockup where they let you mess with all the buttons and knobs, but no instructions on how to run through an actual launch sequence. (What, I'm going to stand here and press random buttons all day? Tell me how it works!)

The Wright Brothers is the story of two crazy men on a mission. Except not so much crazy as humble, hard working, dedicated, diligent mechanical engineers. Which has been much touted through the years, but perhaps lost in the mythology of the Wrights has been the fact that they, and Wilber especially, were truly bona fide geniuses. Who developed systems for calculating the flight of birds, invented a wind tunnel to test wing shapes, and were smart enough to know that building a plane was only half the battle, learning to fly it, the other. Not to mention clever and witty and funny.

My only complaint is near the one directed at KSC -- much to love about the Wrights, their lives before, during, and after their great adventure. But I could have read a whole tome on just the inventing and building and learning to fly the thing. Somehow the building and testing felt anticlimactic -- "they took it out, tried it, tried it again... fast forward: success!" 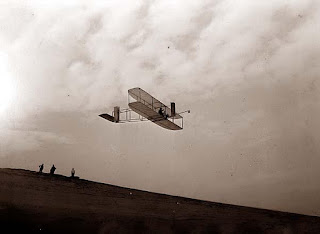 All the time and effort given to the wind tunnel tests, the work designing and building their third machine, and the latest modifications made at Kill Devil Hills had proven entirely successful. They knew exactly the importance of what they had accomplished. They knew they had solved the problem of flight and more. They had acquired the knowledge and the skill to fly. they could soar, they could float, they could dive and rise, circle and glide and land, all with assurance. Now they had only to build a motor.

Incredible that barely over 100 years ago, it was such a controversial thing to ask whether man was meant to fly. Does anything seem so impossible now?