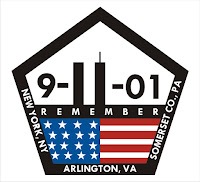 14 years, and it is still gut-wrenching and horrifying and I can still barely stand to watch footage from that day. But to forget would be worse. To forget would be to lose sight of that unifying moment when we were all New York; all Pennsylvania; all the Pentagon; all Americans.. all under attack.

We are a nation increasingly divided, with an increasingly short attention span. But in truth, we are better than this, and that day was proof. When we have to be, when there is no other choice, we are the best of people and the best of nations, and to remember that day is to remember not just the terrible and horrifying but the light and good and generous and brave and best in us.

9/11 was such a clear picture of evil -- but, too, an incredible picture of hope and heroism. And part of the process of bringing good from what is terrible is to recognize wrong for what it is, to lift each other up, and to share in gratitude for the many many heroic acts, great and small that happened that day and in the days since.

It was one of those rare moments that is bigger than all of us, and shared by all of us, and because of that, can still unite us and inspire us to see and do good in the midst of a broken world. #remember911

This year, Winston's 9/11 ceremony has been moved to the 12th and combined with a JROTC challenge. Which is fine, but I wish they had kept something -- anything -- on Friday morning, even if it was just a few council members, a flag, and a moment of silence.

Stranger to me is the lack of events at the Carolina Field of Honor, home of the triad's 9/11 memorial (including a piece of steel from the towers). But the FoH didn't hold a Memorial Day ceremony, either, though, so my confusion abounds re: Triad Park.

The 9/11 Public Safety Challenge, a new event that combines the city’s 9/11 commemoration with a competition for high school Junior ROTC units, will be held from 9 to 11 a.m. Saturday, Sept. 12, in the Winston-Salem Fairgrounds Annex.

“Communities are remembering 9/11 with 5Ks and days of service and in many other ways. We decided to transition our community 9/11 commemoration to an event that connects our high schools with the public safety agencies in Winston-Salem and Forsyth County."

I was asking for something specific and perfect for my city,
Whereupon lo! upsprang the aboriginal name.

Now I see what there is in a name, a word, liquid, sane,
unruly, musical, self-sufficient,
I see that the word of my city is that word from of old,
Because I see that word nested in nests of water-bays,
superb,
Rich, hemm’d thick all around with sailships and
steamships, an island sixteen miles long, solid-founded,
Numberless crowded streets, high growths of iron, slender,
strong, light, splendidly uprising toward clear skies,
Tides swift and ample, well-loved by me, toward sundown,
The flowing sea-currents, the little islands, larger adjoining
islands, the heights, the villas,
The countless masts, the white shore-steamers, the lighters,
the ferry-boats, the black sea-steamers well-model’d,
The down-town streets, the jobbers’ houses of business, the
houses of business of the ship-merchants and money-
brokers, the river-streets,
Immigrants arriving, fifteen or twenty thousand in a week,
The carts hauling goods, the manly race of drivers of horses,
the brown-faced sailors,
The summer air, the bright sun shining, and the sailing
clouds aloft,
The winter snows, the sleigh-bells, the broken ice in the
river, passing along up or down with the flood-tide or
ebb-tide,
The mechanics of the city, the masters, well-form’d,
beautiful-faced, looking you straight in the eyes,
Trottoirs throng’d, vehicles, Broadway, the women, the
shops and shows,
A million people--manners free and superb--open voices--
hospitality--the most courageous and friendly young
men,
City of hurried and sparkling waters! city of spires and masts!
City nested in bays! my city!

New York: The Center of the World (1946-2003)
Epilogue to the epic Ken Burns documentary, New York.
A biography of the towers.