September has long been known as The Best Month Ever to be a Winstonite. Fact. Proving my point, this weekend's agenda includes Caleb Caudle at the Garage, the National Folk Festival just down the road, and the Bookmarks Festival of Books and Authors turning downtown into Literary Heaven. 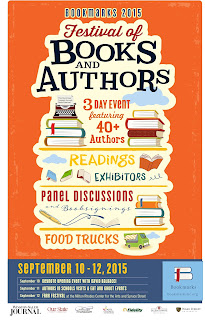 Among the illustrious authors converging on the Twin City: David Baldacci

But part of the joy of Bookmarks is finding new (to me) authors and books for the home library, and these seem like good candidates to add to my 'to read' stack:

His novel, Serafina and the Black Cloak (Disney Hyperion, July 2015), is a spooky mystery-thriller about a brave and unusual 12-year-old girl who lives secretly in the basement of the Biltmore Estate during the time of George and Edith Vanderbilt.

Leigh Ann Henion is the New York Times bestselling author of Phenomenal: A Hesitant Adventurer's Search for Wonder in the Natural World. It's the story of how she chased eclipses, migrations, and other natural phenomena around the globe to reawaken her sense of wonder.

In his new novel, Above the Waterfall, he returns to the Appalachians with a story of a tight-knit community rife with secrets and suspicious of outsiders.

He is the author of The House That Ruth Built and The Victory Season, and he is a frequent contributor to The New York Times sports pages.

...Next weekend hosts the Air Show and the Texas Pete Culinary Extravaganza.
September. I'm tellin ya.