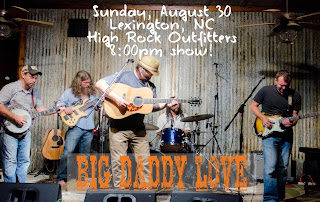 Around this part of the world, for the past few years, High Rock Outfitters has been The Place to see music. (Yeah, you heard me Garage. Ziggy's, we're not even going to talk about what happened to you when you moved downtown....)

Steel Wheels. Wood Brothers. Possum Jenkins.... So many great bands have rolled through there, in between stops at bigger venues, because of how special it was.

There's a kind of magic between the folks running it, and the bands invited to play and the folks driving down for a show. It wasn't just about making place for music, but about building community and creating a space for the two to happen together.

But Sunday will be the last show there for awhile, and it is sure to be a heart breaking, bittersweet, special night, with the wonderful folks from Big Daddy Love. They've  been an HRO mainstay and the two groups really grew up together. They've played all over now, and even opened Bob Seger in Raleigh. (Then the next night, rolled into Lex and played an incredible, memorable concert for the folks they call family.) But HR has been something of a home base, and you could tell before a concert there that it was less performance, more backyard party with all the neighbors invited.

So it is fitting and right for them to play this one last show at High Rock. It will be a homecoming. And a reunion. And you are forewarned that there will certainly be tears. But if you ask the right person they might share some of their peach moonshine to toast with.

My last trip home, dad treated us to a family viewing of the fantastic tail of intrigue -- James Bond: The True Story. It is the story of Dušan Popov, who also plays a large roll in this fabulous gem of WWII history and spycraft:

Double Cross: The True Story of the D-Day Spies

A thoroughly entertaining history lesson on the incredible deception that made Operation Overlord possible. Operation Fortitude was years in the making, and relied on perhaps the most improbable group of characters possible. But somehow it held together, and Germany was tricked into waiting 7 weeks before sending reinforcements to Normandy.


Notes:
(somewhat spoilerish. But I assume you already know who wins in the end)

-- An astonishing number of double agents did not have to be 'turned', they allowed themselves to be recruited as spies for Germany and then immediately went to the Allies, to turn themselves in and work against the Germans

-- For the most part, the double agents weren't British or German -- they were Spanish, French, Polish, Slavic, Russian... Also for the most part, they were completely unqualified for spy-work, were filled with delusions of grandeur, erratic... keeping them happy and out of trouble was a herculean task

-- Several agents became so trusted that Germany passed on their messages verbatim, which allowed the British (intercepting messages) to have a quick cheat-sheet to code breaking all the other radio traffic of the day

-- Apparently the Germans had an incredibly strange confidence in the idea that one could just parachute unprepared, untrained foreign spies into England and these agents would somehow land safely, unnoticed, and could just insert themselves into the English country life.

-- Many Germans who were anti-Nazi or otherwise just did not want to fight were able to find their way into the Abwehr (military intelligence/spy service). Until it was routed and folded into stricter German departments they could travel pretty freely, and often wound up in offices like France, Spain, Portugal, where they could work off-book and, for a time, obey their conscience as far away from central Germany as possible. Many of the plots to assassinate Hitler came out of the Abwehr.

-- Along with the conscientious objectors, the Abwehr also had a lot of lazy, corrupt officers, resulting in a pretty ineffective group overall --  these officers were so fearful that they would be swept up in retribution if one of the spies did not turn out well that they covered over all sorts of obvious signs their agents were actually doubles


Radio transmitters, Secret Ink, Coded telegrams, Parachute Drops, Kidnappings... the stuff of Old School Spy Craft. But it also explained a lot of the Bureaucratic and Human Elements -- the infighting, plotting, corruption, and outright mistakes -- that make war planning such a messy thing. 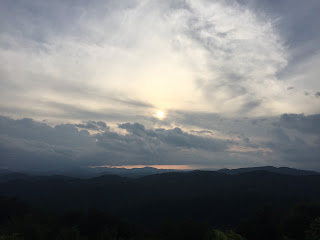 Over the past year and a half, and especially over the last 6 months, I've tried over-ambitiously dabbling in a lot of things. Mostly pieces of my old life, trying to find fragments I could still hang on to, even in small ways. Or things I'd wanted to do for awhile but hadn't had time for. Grasping at ways to redeem all these weeks and months from feeling like wasted time.

The problem is, I find I am far too optimistic about my limits and remarkably terrible at estimating the cost.. It is so tempting to take advantage of 'good' days, hoping that 'this time' they will just continue indefinitely. Which of course never happens, and then I wind up crashing into bad days in pretty painful ways.

And so: a new commitment to only a handful of small things. To figure out what is manageable and sustainable, even if it means forgoing stuff that 'should be' do-able, and only rarely jumping into fun adventures that my heart says would be worth the cost.

Ergo: blogging. While most of life these days revolves around doctor appointments and basic life-skills, I'm hoping that writing about it will help me to implement this new goal of 'better balance'; and to recognize progress, however small; and to see all the ways that life is much bigger than it sometimes seems..

And also, maybe, to help me accept that if anyone is going to redeem this time, it will be God and not me. And it will be His way not mine. And that it is probably already happening, if I would let go of trying to force everything back into the shape I want it to be.

And also, well, I really need a hobby.

The goal is 3 posts a week, and hopefully sometimes more:
M: Music Mondays
W: Books, Movies, Art, Science, Tech
F: Bits of real life, including my many Misadventures in Medicine